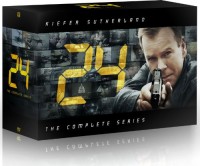 Among the most innovative one-hour dramas ever to explode onto the small screen, 24 has exhilarated viewers and critics worldwide for eight electrifying seasons. Emmy® Winner Kiefer Sutherland stars as counter-terrorism agent Jack Bauer, whose rogue tactics constantly pit him against his superiors. With tension-filled storylines unfolding in real time, and a brilliant supporting cast, 24 remains one of TV’s most talked-about series.

This unparalleled 56-disc collection offers all eight seasons, the feature-length 24: Redemption, and a bonus disc of never-before-seen special features.
Review for Season One:
Such a simple idea–yet so fiendishly complex in the execution. 24, as surely everyone knows by now, is a thriller that takes places over 24 hours, midnight to midnight, in 24 one-hour episodes (well, 45-minute episodes if you subtract the commercials). Everything takes place in real time, which means no flashbacks, no flash-forwards, no handy time-dissolves. Every strand of the plot has to be dovetailed and interlocked so things happen just when they should, in the right amount of time. Not that easy.

Creator Robert Cochran and his team of writers and directors have done an impressive job of putting the jigsaw together and keeping the tension ratcheted up high, as federal agent Jack Bauer (Kiefer Sutherland) runs around L.A. trying to stall an assassination attempt on an African American presidential candidate and rescue his wife and daughter from the clutches of the Balkan baddies. Twists, turns, revelations, and cliffhangers are tossed at us with satisfying regularity. It’s not perfect: we get some hokey plot devices (instant amnesia, anybody?); the final twist makes no sense whatsoever; there are altogether too many huggy family moments; and as for Dennis Hopper’s “Serbian” accent….

Even so, this is undeniably mold-breaking TV. Sutherland, rescuing his career from the doldrums in one heroic leap, fully deserves his Golden Globe. Sets and locations are artfully deployed, and Sean Callery’s score is a powerful, brooding presence. Like Murder One and The Sopranos, 24 is one of those series that future TV thrillers will be measured against. —Philip Kemp

Review for Season Two:
Jack Bauer is having another one of his “very bad days” in the second season of the groundbreaking real-time thriller 24. Once again the hours are ticking by with more guaranteed cliffhangers than a convention of mountain climbers. Holed up in a Los Angeles condo and estranged from his daughter, Jack is no longer on the government payroll; unfortunately for him, this small fact doesn’t seem to matter to President David Palmer and the NSA, who call him back in to the CTU and give him 24 hours to infiltrate a terrorist organization that is planning to detonate a dirty bomb in the city of angels. All Jack wants is to get his daughter out of the city, unfortunately Kim’s new employer, the abusive father of the child she is nannying, has other ideas.

Fans of the original won’t be disappointed, as there are more than enough shock moments in the first few hours to hint at the climactic build-up to come, while newcomers can quickly get involved in the lives of Jack and his family. There are some new characters to bolster the veteran cast and, interestingly (although not surprisingly), Jack’s character has taken an altogether darker, more psychopathic turn. The danger the characters find themselves in also has a much more global, not to mention topical, impetus, grounded as it is in the war against terrorism. Although the territory is more familiar this time around, this second season is just as much a high-tension, taut, adrenalin-fuelled ride as the first, and one that will have you glued to your TV for the next 24 hours. —Kristen Bowditch

Review for Season Three:
There’s not one cougar to be found in 24’s dynamic third season, and that’s good news for everyone. After Jack Bauer’s daughter Kim (Elisha Cuthbert) survived hokey hazards in season 2, she’s now a full-time staffer at CTU, the L.A.-based intelligence beehive that’s abuzz once again–three years after the events of “Day Two”–when a vengeful terrorist threatens to release a lethal virus that could wipe out much of the country’s population. Jack (Kiefer Sutherland) attempts to broker a deal for the virus involving drug kingpin Ramon Salazar (Joaquim de Almeida), whose operation Jack successfully infiltrated at high personal cost: to maintain his cover, he got hooked on heroin. That potentially deadly triangle–drug lords, addiction, and bioterrorism on a massive scale–sets the 24-hour clock ticking in a tight, action-packed plot involving a potential traitor in CTU’s midst; the return of TV’s greatest villainesses in Nina Meyers (Sarah Clarke) and former First Lady Sherry Palmer (Penny Johnson Jerald); a troubled romance between Kim and Jack’s new partner Chase (James Badge Dale); and a scandalized reelection campaign by president David Palmer (Dennis Haysbert), who monitors CTU as they struggle to (literally) save the day.

The intricately woven subplots that are 24’s greatest strength are masterfully developed here, and character arcs are equally strong, especially among CTU staffers Tony (Carlos Bernard) and his wife Michelle (Reiko Aylesworth); CTU director Ryan Chappelle (Paul Schulze), who is season 3’s tragic bargaining chip; and the annoying but well-intentioned Chloe O’Brian (Mary Lynn Rajskub), who makes pivotal contributions with by-the-book efficiency. It’s 24’s superior casting that overcomes the series’ occasional lapses in credibility, and season 3’s twists make marathon viewing a nerve-wracking delight. By the time it’s all over, 24 once again leaves you gratefully exhausted. As always, Sutherland anchors the series in the role he was born to play. When Jack takes a private moment to release 24 hours’ worth of near-fatal tension and psychological anguish, Sutherland proves that 24’s dramatic priorities are as important as its thriller momentum. DVD extras include behind-the-scenes featurettes (about the prison break sequence, climactic F-18 Hornet air-strike, and real-life bio-weaponry) that pay welcome tribute to the series’ hard-working crew, who create Emmy-worthy television under pressures as intense as 24 itself. —Jeff Shannon

Review for Season Four:
Oh boy. Here we go again! Just another exciting day in the life of 24 super-agent Jack Bauer (Kiefer Sutherland). The season kicks off with a deadly terrorist strike resulting in the kidnapping of his new boss, the U.S. Secretary of Defense James Heller (William Devane). Although a fired, ex-employee of the Counter Terrorist Unit (CTU), it is no surprise who is going to shift into full gear to bring the terrorists to justice. However, it doesn’t take the super-agent long to discover the kidnapping of his boss is part of a much larger plan, master-minded by Habib Marvan (Arnold Vosloh) the middle eastern terrorist cell leader the US government has been trying to track down for years. Considered by many to be the best season of the first four, 24 – Season 4 is a definite departure from the first three seasons. First, the cast is almost entirely new. Second, the pacing of each episode does not seem as frantic. There appears to be a shift from the reliance on plot-shifting cliff hangers (which in some ways dragged down the quality of Season 3), to a focus on complex, over-arcing, multiple storylines, albeit very violent. What may be missing in superficial action clichés is definitely compensated for in a richer plot. That’s not to say the show has slowed down; it’s still amped up beyond anything else on TV, but compared to the previous seasons, 24 has gotten a lot smarter, and in turn, better. —Rob Bracco

Pivoting on a declaration of martial law and a mysterious cabal of unnamed conspirators, “Day 5” shocked even loyal 24 fans with a high body count including several important supporting characters. It all adds up to an exceptional season that earned Sutherland a well-deserved Emmy (for Outstanding Lead Actor in a Drama Series), equally deserving Emmy nominations for Itzin and Sharp, and an Emmy win for co-executive producer Jon Cassar’s direction of the riveting season premiere. And while the breathtaking twists of 24 don’t always hold up to intense scrutiny, these 24 episodes (running about 43 minutes each) are tightly written and flawlessly directed with an involving emphasis on thriller plotting and dramatic focus on the complex and operatically tragic relationship between President Logan and his traumatized wife. Add it all up, and you’ve got an addictive reason to look forward to season 6. —Jeff Shannon

Review for Season Eight:
Network television’s most exciting series ends with a bang–a lot of bangs, in fact, along with multiple bams, whams, and booms—as 24 bows out with this six-disc set of episodes from its eighth and final season. As the action begins in New York City, Jack Bauer (Kiefer Sutherland), now a grandfather, has retired from his gig at the Counter Terrorist Unit (CTU) and plans to move to California to be with his family. Yeah, right. When he learns of a plot to assassinate President Omar Hassan (Anil Kapoor) of the mythical Islamic Republic of Kamistan–who’s set to join the U.S. president, Allison Taylor (Cherry Jones), and the Russian leader at the United Nations, where they will sign a historic agreement that will end Kamistan’s nuclear program and bring lasting peace to the Middle East–Jack leaps right back into the fray. Needless to say, the plot thickens faster than the pools of congealed blood he inevitably leaves in his deadly wake. Who’s behind the assassination scheme? Is it Hassan’s power-hungry brother, who has no desire to give up his country’s nukes, or is he in cahoots with bigger, more sinister forces? Are there even CTU operatives involved in these dastardly machinations? Can Jack trust a single soul other than himself? That he will get to the bottom of all of this (or the top, as a central conspiracy reaches to the very highest government levels) is a given. That he will indulge in some questionable tactics to do so, including cynically using his allies and brutally torturing his enemies (depicted in some intense and rather graphic scenes), is also expected, especially as his relationship with a disgraced former FBI agent (Annie Wersching) ups the personal ante for him to the point of near-madness. Whether he will survive this particular day intact, however, is another matter entirely.

The makers of 24 have already shown that they’re willing to go way over the top to preserve the central conceit (an entire season takes place in a single day, with each episode consuming one hour of that day), and the eighth season is no different. Plot twists that defy all credibility are not uncommon; there’s no time to track down rumors or verify information, so the action tends to proceed in almost cartoon-like fashion. Many characters make cardboard look sturdy, especially the bad guys (a bunch of arrogant fools, craven traitors, and murderous louses). But that’s what has made the show so addictive; it simply hurtles along, leaving no time to ask questions. And while the adventures of Jack Bauer, the ultimate one-man army, appear to be over for good, this season makes us wish that a day were just a bit longer then 24 hours. Bonus features include some extended episodes, “scenemakers” (detailed looks at certain scenes) for the majority of episodes, deleted scenes, and more. –Sam Graham

There are no reviews yet.

Be the first to review “24: The Complete Series” Cancel reply