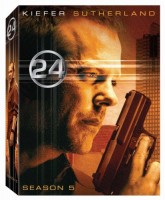 Pivoting on a declaration of martial law and a mysterious cabal of unnamed conspirators, “Day 5” shocked even loyal 24 fans with a high body count including several important supporting characters. It all adds up to an exceptional season that earned Sutherland a well-deserved Emmy (for Outstanding Lead Actor in a Drama Series), equally deserving Emmy nominations for Itzin and Sharp, and an Emmy win for co-executive producer Jon Cassar’s direction of the riveting season premiere. And while the breathtaking twists of 24 don’t always hold up to intense scrutiny, these 24 episodes (running about 43 minutes each) are tightly written and flawlessly directed with an involving emphasis on thriller plotting and dramatic focus on the complex and operatically tragic relationship between President Logan and his traumatized wife. Add it all up, and you’ve got an addictive reason to look forward to season 6. –Jeff Shannon

On the DVDs
Discs 1-6 contain four episodes each, with several episodes including optional viewing of extended or alternate takes of selected scenes. A total of 12 full-length episode commentaries are provided by 24‘s primary cast and crew, allowing listeners a comprehensive appreciation of the series’ extended “family” of talent, along with a wealth of production anecdotes, revealing observations about plotting and character, and a welcome overview of individual personalities and contributions. Disc 7 is packed with features, beginning with a season 6 prequel that offers a tantalizing glimpse of things to come, with an interrogation and escape scenario set seven months after the events of “Day 5”; by comparison, the season 6 trailer offers little more than a recap of season 5. The featurettes are all well-crafted and worth a look, beginning with a “Supporting Players” profile of 24‘s extended cast (including some surprising glimpses of their off-screen hobbies and activities); a detailed documentary about 24‘s innovative and hard-working camera crew; a profile of music composer Sean Callery, who demonstrates his versatile mood-setting techniques; a detailed exploration of the “Presidential Retreat” set with production designer Jonathan Hodges and colleagues; a “100th Episode Reel” with tightly-edited clips from seasons 1-5; and a sampling of cast and crew photos from 24: Behind the Scenes, a picture book published in November 2006. Kudos to Sparkhill Productions for continuing to provide 24 bonus features as well-made as the series itself. –Jeff Shannon

There are no reviews yet.

Be the first to review “24: Season 5” Cancel reply